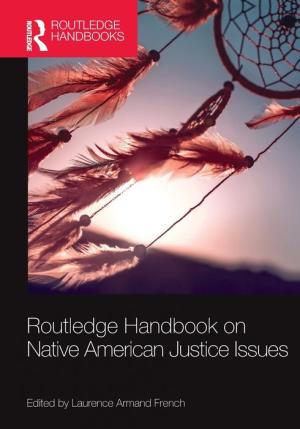 Native Americans are disproportionately represented as offenders in the U.S. criminal justice system. Routledge Handbook on Native American Justice Issues is an authoritative volume that provides an o...

Native Americans are disproportionately represented as offenders in the U.S. criminal justice system. Routledge Handbook on Native American Justice Issues is an authoritative volume that provides an overview of the state of American Indigenous populations and their contact with justice concerns and the criminal justice system. The volume covers the history and origins of Indian Country in America; continuing controversies regarding treaties; unique issues surrounding tribal law enforcement; the operation of tribal courts and corrections, including the influence of Indigenous restorative justice practices; the impact of native religions and customs; youth justice issues, including educational practices and gaps; women’s justice issues; and special circumstances surrounding healthcare for Indians, including the role substance abuse plays in contributing to criminal justice problems.

Bringing together contributions from leading scholars – many of them Native Americans – that explore key issues fundamental to understanding the relationships between Native peoples and contemporary criminal justice, editor Laurence Armand French draws on more than 40 years of experience with Native American individuals and groups to provide contextual material that incorporates criminology, sociology, anthropology, cultural psychology, and history to give readers a true picture of the wrongs perpetrated against Native Americans and their effects on the current operation of Native American justice. This compilation analyzes the nature of justice for Native Americans, including unique and emerging problems, theoretical issues, and policy implications. It is a valuable resource for all scholars with an interest in Native American culture and in the analysis and rectification of the criminal justice system’s disparate impact on people of color.
더보기 더보기 닫기

Table of Contents
Part I: HISTORICAL ANTECEDENTS: A DISMAL PAST
Introduction

Table of Contents
Part I: HISTORICAL ANTECEDENTS: A DISMAL PAST
Introduction

Chapter 4. The Cherokees: Transformation from Aboriginal Society to Civilized Tribe

Chapter 7. Toward Self-Determination – The New Federalism

Chapter 12. The Ralámuri Language: Opportunities for Revitalization in the Current Context

Laurence Armand French has the Ph.D. in sociology/social psychology from the University of New Hampshire, Durham and the Ph.D. in educational psychology/cultural psychology from the University of Nebraska, Lincoln. He has worked with tribes and Indian students since 1972. He has over 300 academic publications, including 20 books, many dealing with American Indian issues. He spent a semester studying Canadian Indians during the fall semester 2010 as the Solicitor General’s Endowed Visiting Chair of Criminology and Criminal Justice at St. Thomas University in Fredericton, New Brunswick, Canada. He is a licensed clinical psychologist (Arizona) and Fellow of the American Psychological Association; a senior Fulbright Scholar and Fulbright Specialist.