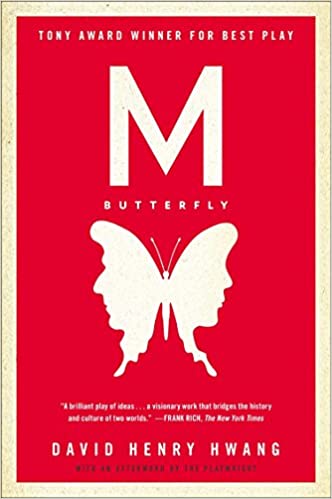 Winner of the Tony Award for Best Play, nominated for the Pulitzer Prize for Drama, and soon to be back on Broadway in a revival directed by the Lion King''s Julie Taymor, starring Clive Owen

Winner of the Tony Award for Best Play, nominated for the Pulitzer Prize for Drama, and soon to be back on Broadway in a revival directed by the Lion King''s Julie Taymor, starring Clive Owen

"A brilliant play of ideas… a visionary work that bridges the history and culture of two worlds."—Frank Rich, New York Times
Based on a true story that stunned the world, and inspired by Giacomo Puccini''s opera Madama Butterfly, M. Butterfly was an immediate sensation when it premiered in 1988. It opens in the cramped prison cell where diplomat Rene Gallimard is being held captive by the French government—and by his own illusions. He recalls a time when Song Liling, the beautiful Chinese diva, touched him with a love as vivid, as seductive—and as elusive—as a butterfly.

How could he have known that his true love was, in fact, a spy for the Chinese government—and a man disguised as a woman? The diplomat relives the twenty-year affair from the temptation to the seduction, from its consummation to the scandal that ultimately consumed them both.

M. Butterfly is one of the most compelling, explosive, and slyly humorous dramas ever to light the Broadway stage, a work of unrivaled brilliance, illuminating the conflict between men and women, the differences between East and West, racial stereotypes—and the shadows we cast around our most cherished illusions.

David Henry Hwang is a playwright, screenwriter and librettist for musicals and operas. He is a Tony Award winner and three-time nominee, a three-time Obie Award winner, and a two-time Nominated Finalist for the Pulitzer Prize in Drama. His plays include M. BUTTERFLY, CHINGLISH, GOLDEN CHILD, YELLOW FACE, THE DANCE AND THE RAILROAD and FOB. He wrote the script (or "book") for the Broadway musicals Elton John and Tim Rice''s AIDA (co-author), which ran almost five years on Broadway, the revised FLOWER DRUM SONG, and DISNEY''s TARZAN, with songs by Phil Collins. As America''s most-produced living opera librettist, his works include four pieces with composer Philip Glass, as well as AINADAMAR (Osvaldo Golijov - winner of two 2007 Grammy Awards), THE SILVER RIVER (Bright Sheng) and ALICE IN WONDERLAND (Unsuk Chin). His first play, FOB, premiered in his lounge of his dormitory at Stanford University. Hwang penned the feature films M. BUTTERFLY, GOLDEN GATE, and POSSESSION (co-writer), and co-wrote the song "Solo" with composer/performer Prince. Recently, he won the 2011 PEN/Laura Pels Award for a Master American Dramatist, the 2012 Inge Award for Distinguished Achievement in the American Theatre, and the 2012 Steinberg Distinguished Playwright Award. He is currently the Residency One Playwright at New York’s Signature Theatre, which is producing a season of his plays in 2012-13, including the premiere of his newest work, KUNG FU, inspired by the life of Bruce Lee. He lives in Brooklyn, New York, with his wife, actress Kathryn Layng, and their children.