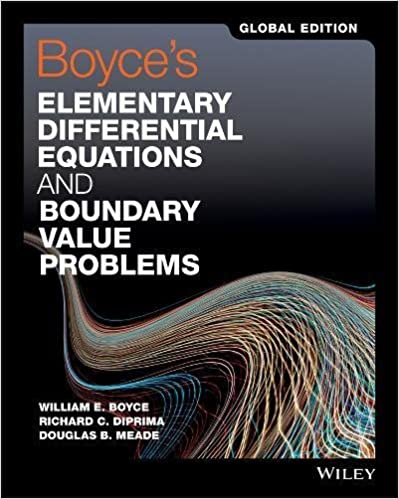 Elementary Differential Equations and Boundary Value Problems 11e, like its predecessors, is written from the viewpoint of the applied mathematician, whose interest in differential equations may somet...

Elementary Differential Equations and Boundary Value Problems 11e, like its predecessors, is written from the viewpoint of the applied mathematician, whose interest in differential equations may sometimes be quite theoretical, sometimes intensely practical, and often somewhere in between. The authors have sought to combine a sound and accurate (but not abstract) exposition of the elementary theory of differential equations with considerable material on methods of solution, analysis, and approximation that have proved useful in a wide variety of applications. While the general structure of the book remains unchanged, some notable changes have been made to improve the clarity and readability of basic material about differential equations and their applications. In addition to expanded explanations, the 11th edition includes new problems, updated figures and examples to help motivate students. The program is primarily intended for undergraduate students of mathematics, science, or engineering, who typically take a course on differential equations during their first or second year of study.
The main prerequisite for engaging with the program is a working knowledge of calculus, gained from a normal two or three semester course sequence or its equivalent. Some familiarity with matrices will also be helpful in the chapters on systems of differential equations.
더보기 더보기 닫기